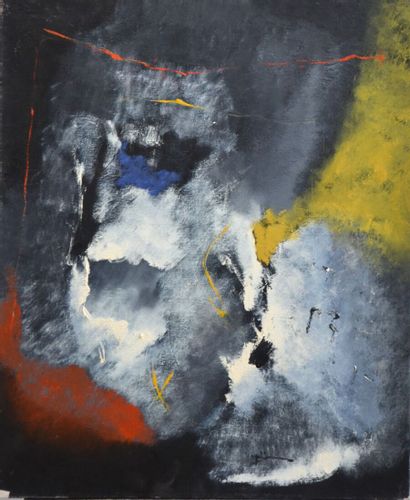 COLLECTION OF THE LOTS ACQUIRED BY APPOINTMENT DURING THE WEEK FOLLOWING THE SALE AT THE TAYLOR FOUNDATION, 1 RUE LA BRUYERE, 75009 - PARIS, FROM TUESDAY TO FRIDAY ON PRESENTATION OF THE SLIP PREVIOUSLY PAID BY CREDIT CARD ONLINE OR BY BANK TRANSFER TO THE AUCTION HOUSE

Franck Duminil began his training at the École des Beaux-Arts in Bordeaux, where he studied architecture in the Ferré workshop. He then attended Jean Prouvé's classes at the Conservatoire National des Arts et Métiers. In parallel to a career as a draftsman in various architectural firms, Franck Duminil draws and paints. He decided to devote himself entirely to painting in the 1970s. Throughout his life, his works will be presented in many exhibitions and shows. They appear in several public and private collections.

Inspired by his view of nature, the work of Franck Duminil is part of the current of lyrical abstraction. The art historian and critic Lydia Harambourg emphasizes that Franck Duminil "transgresses all traditional formal organization and tends towards a visible and invisible reality".

The retrospective exhibition of the work of Franck Duminil (1933-2014) will be held in the studio of the Taylor Foundation from September 1 to 24, 2022. It will present works from the donation made by the artist's widow,

According to Mrs. Duminil's wishes, at the end of the exhibition and still in the studio of the Taylor Foundation, an auction of part of the works will take place on Thursday, October 13, 2022. The proceeds of this sale will be used to create a new prize in memory of Franck Duminil.

With your consent, we would like to use cookies placed by us on this site. Some of these cookies are strictly necessary for the smooth running of the site. Others are used to:

Your consent to the installation of non-strictly necessary cookies is free and can be withdrawn or given at any time.

By allowing these cookies, you agree to the deposit, reading and use of tracking technologies necessary for their proper functioning.
Read more about our privacy policy.